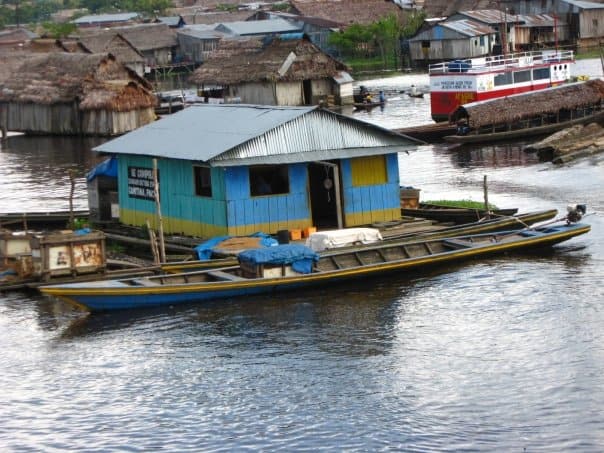 Jealousy has been a major problem in my life. It’s rooted in deep insecurity, and something I haven’t been able to even manage well, much less heal it. It could be a problem here.

We met the Buddhist woman (who had been in my first group and come to the village my first time) in Iquitos, as she would be visiting for just a week. She didn’t even really know why she was coming, but figured it would be apparent at some point.

I didn’t like being in Iquitos, constantly watching my back for the Western shaman and company, but was I was excited to see the Buddhist. In the lobby of La Maranon Hotel, she comes down the stairs, glowing and happy to see us as well. A warm reunion of hugs and laugher occurred. Soon Luco left us girls to catch up.

She had a friend from home who worked with a newer shaman, and wanted to introduce Luco to him to feel him out. She considered the Elder as her Maestro, and she didn’t know if it would be cool.

After meeting the new shaman, Luco said he didn’t feel a good energy from the guy at all. He felt he was young and green, and didn’t have enough Medicine to be doing what he was doing.

This was the Buddhist’s and my first taste of the old-school energy amongst Peruvian shamans in the Amazon…they come from jungle survival culture, and are historically fairly poor. Therefore, survival of the fittest energy still runs rampant.

She asked Eluco a question. “What do you think about me going out there to try a ceremony? Would that be disrespectful to [the Elder shaman]? Would even asking piss him off?”

“I wouldn’t care. I think everyone needs to try things to get their own experience. Of course what happens there is your responsibility, not mine. But he will have to speak for himself,” was Luco’s reply. She would sit with it and decide.

A few days later, she comes back with a story.

“Okay, so I decided that I was not going to ask him and just go out there. After all, even though he’s my Maestro, I still get to call the shots in my own life. When it came time to do ceremony, I asked my own spirits and got a clear ‘no’ for an answer anyway.

But I met this amazing girl on the way in. She was on the path on the way out of the campground. She is from Boulder and also interested in going to the same university I’m at! She’s been shaman-shopping down here for about a month. I felt a strong connection to her. Hopefully she’ll come out with us!”

The Moment I’d Been Dreading

I really hated being in Iquitos, but what I hated even more was the fact that I’d been sitting on this lie to the Western shaman for a whole month, for some reason that I didn’t even understand. I had resentment towards the Elder for making me do it, and resentment towards myself for not standing my ground.

I wanted so badly to come clean. It had been a long time, and I really, really didn’t think the Western shaman was going to care.

The Buddhist and I went out to eat, sitting upstairs chatting. As she spoke, suddenly her eyes got wide as she looked past me at the door.

“It’s them,” she warned me calmly. My body flooded with anxiety. Fight or flight. They may never see me with my back to them, but without thinking, I turned around and walked right into the lie, without a plan.

“Hey!” I called and gave them a hug. “I just got back in town! I’m hanging out with Eluco out in their village!” Lies, lies, lies. Well, partial truth, but still lies. They smiled and we small-talked, until their food was ready and they continued on downstairs to eat. I couldn’t touch my food. This was bullshit

By the grace of God, I happen to know where both the Elder and Eluco were in that moment. I walked out of the restaurant and headed for the Elder’s room. I knocked on the door.

“Okay, look, I need to tell the truth. It’s been a month, I just ran into him, and I don’t want to keep up this lie any more. He’s not going to care. Is that cool?” I was proud of myself for standing firm.

“Sure, that’s cool, whatever.” was his lacidazical response, like it was no big deal from the beginning (seriously?!) Next I called up Luco, told him the same thing, getting the okay. Nervously, I headed back to the restaurant to confess.

I was relieved when I saw they were both still there. I breathed through the anxiety, and marched up to their table.

“Hey, I’m sorry to interrupt, but I need to tell you something. It doesn’t have to be right now, but it needs to be soon.”

“Now’s fine,” he responded. I spilt. I told him about the “order” from the Elder, and how I felt stuck, and how sorry I was for lying. I was very obviously near tears. The male apprentice with him compassionately took my hand.

“It’s cool Meghan, we knew anyway. One of the apprentices saw that you were there in a vision during ceremony!” We all laughed as I figured they would know. The deed was done, but somehow I didn’t feel the warmth from the Western shaman like I did from the apprentice.

I don’t know why I wanted his approval so bad, or felt the strong desire to connect with him (we’re about the same age) but for some reason, I always felt like a teenager trying desperately to make friends with him. Everything seemed cool on paper, but I only felt half better.

Jealousy Builds When Beautiful Girls are Around

A few days later, the Elder, Luco, and a few others met up with the Buddhist, followed by a beautiful girl behind her.

“Hey, nice to meet you!” she introduces herself. I’m triggered already. Of course she has to be gorgeous. Why couldn’t she have brought an ugly girl out? I hate competition. I know this is my ego talking, but Jesus.

“Hey, I’m Meghan, nice to meet you,” I try to control the jealousy already rearing it’s ugly head inside of me. It’s so stupid, nothing has happened. Just the mere presence of a beautiful single girl bothers me? God I must be insanely insecure.

We load into the van and head down to where we will be doing ceremony tonight outside of Iquitos, at a friend of the Elder and Luco’s. Chatting and getting to know each other ensues over the next hour, but I retreat within. I get quieter and quieter, as I try to manage the jealous rage that is building.

I’m sure he was just waiting for someone more pretty to come along, and then I’ll be out the door. I should just quit while I’m ahead. I work myself into a mental and emotional frenzy, while doing my best not to explode all over this poor girl. My only management option is silence and withdrawal.

Luco can sense something is up with me, but he doesn’t say anything. When we get there, and set up our mosquito nets, he sits with me on the hammock after putting on his favorite music, Madonna. I feel better since he is sitting with me, almost like I’m marking my territory.

The Beautiful Girl’s mosquito net is set up across the room, so I don’t think I have anything to worry about. She’s pretty nice anyway, I can’t deny that. She laughs at the fact that this shaman loves Madonna (also her favorite) and declares it must be a sign.

Time for ceremony. After the preparation has completed, we retreat into our own worlds to see what is there to purge and learn. I recognize immediately the anger that has been brewing underneath the irrational jealousy. I allow it to purge out, safely and steadily, as my mind goes through angry fits of rage.

I had also picked up some energy from an argument I had with my friend back home over the phone. Black, psychedelic uncomfortable energy flies from my body as I rock back and forth in cold sweats. When the difficult purge completes, I feel elated and relieved.

Meanwhile, the Buddhist is laying on the floor pretty close to the Beautiful Girl’s chair. Since we were at someone else’s rustic house, we didn’t have our normal quantity of puke buckets, and had been sharing.

When I was ready to purge, Luco had brought the bucket to me. Suddenly Beautiful leans over the side of her chair, where the puke bucket once was, and lets loose. The watery vomit lands only inches from the Buddhist’s head!

“Oh, my God,” she gasps in disbelief as she recognizes the lack of bucket. “I am SOOOO sorry!”

“It’s cool, honey!” She laughs it off and goes back into her visions. That is about the epitome of chill!

By the next day we had all bonded, and Beautiful was on board. I was not angry anymore (still a bit of manageable jealousy based solely on appearance) but all was well. We headed back to Iquitos to prepare to embark for the village, and the Buddhist back to the States.