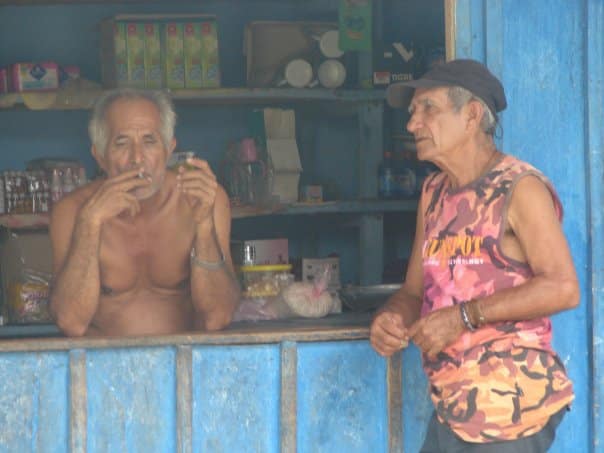 Hard Intro into the Reality of Village Life

We had heard rumors that a couple we knew from the program would be coming back. We headed back to Iquitos to find out.

“Hi!” A warm reunion between Luco and the three of us ensued. Apparently they would be out here about a month, do a shamanic diet (absorbing various non-Ayahuasca plant medicines into the body in order to protect and strengthen it, preparing to transcend higher levels.)

After that they would head out to Machu Picchu. They had been dating long distance since our first program, and came out to see if they really wanted to pursue the relationship or not.

Unmistakeably, with the two of them comes juicy drama. Within weeks, the whole village knew that the boyfriend was supposedly single, and out on the prowl.

Available young girl after the next more or less presented herself to him (or the families did) trying to see if he’d bite. It was all a bit much for me, but mildly entertaining.

The girlfriend (Spunky One) had decided to help choose the one that she liked the most for him (interesting.) The Beautiful Girl and I sat on the sidelines and spectated, not wanted to be pulled into the rumors that were going around, trying to sabotage the competition. As chill as this village is, it’s still a very, very small town.

This was also one of the first times I had seen any inkling of resentment within the Elder’s mesa (the group of shamans and apprentices who hold ceremonies together.) Supposedly (as rumor had it) the elder shaman and his wife wanted the boyfriend to like their youngest daughter (early 20’s).

Meanwhile, the married older couple (both shaman) had their eye on him dating their daughter. I started hearing small jabs of shit-talking about the other, in order to make their own daughter appear more desireable.

As this began to build, the Boyfriend out of the whole thing completely. He had no idea what his being single would do in this town, and decided it was about time to go, before it caused family warfare.

With that, they decided that as soon as the diet was over (eight days) the two of them would head off to Macchu Picchu (as friends, of course.)

So the diet was held at the new campground of the elder shaman. It was a beautiful place, with a mirror-reflecting black lake and palm trees to boot. He had his nine beloved water buffalo roaming there as well.

There were a ton of mosquitos, so there were only a couple of hours during the day we could be comfortable outside of our nets. But all and all, it was a great experience.

The Boyfriend had decided to not participate in the diet part, only the normal Ayahuasca ceremonies. Since Luco was off working on building the house, the two of them hiked through the trail before and after ceremony, but were not there during the day.

There was also some underlying tension Luco was feeling from the elder married shaman couple, and their adult son (who’s an apprentice.)

The Spunky One was a trip. Being a yoga/massage/tantra instructor, she seeped sexual energy everywhere she went. And she had no fear. One day she busted out ‘The Joy of Sex’ (illustrated edition) and was passing it around for the elder shaman and his family to see! It turned into quite a conversation topic actually.

Another time she cut naked women out of an X-rated magazine, taped them onto lighters, and gave them out to everyone. This girl is walking entertainment, but sometimes makes even the most fearless person blush.

It was over this diet that I began to sense some very real undertones of the building resentment coming from the married shamans and their son. I would catch little comments here and there about Luco, and even hidden laughter as they all invited extended family and friends to partake in the “free” daily lunches that Luco was paying for out of his own pocket (yet wasn’t physically there to participate in.)

Every day they asked for a food increase, supposedly because the three dieters needed more food. Plus they kept trying to get money out of me in shady ways, and I was not feeling it.

These little things were not a huge deal, until a major accusation took place.