Ayahuasca Ceremony #191/Uchu Sanango Diet #2: Know When it is Time to Walk 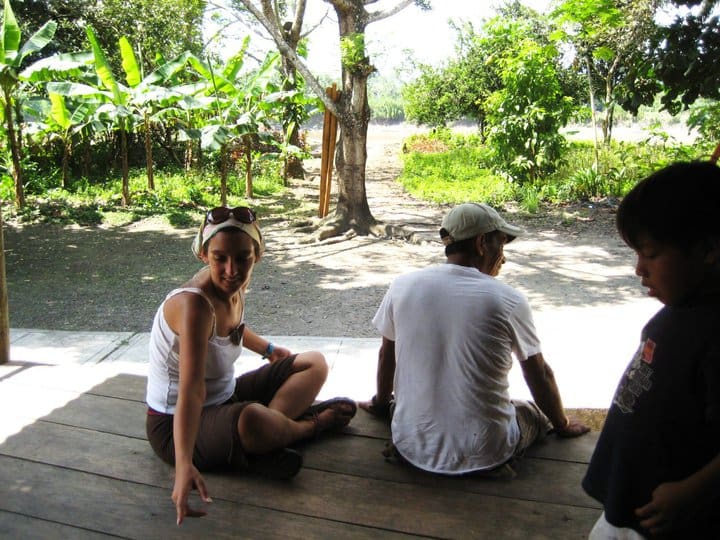 So this round in Iquitos I did the same things as I did before, but I felt like a million bucks doing it with all that energy gone and the ego perspective not messing with my mind. I was so ready for another Sanango diet! I had no idea I’d be faced with the challenge of knowing it was time to walk away.

Quickly, Sanango is a root dieted in the form of a tea. It is one of the most powerful plants to physically consume, and it is seriously a no-joke diet. It basically pushes out trapped, cold energies from the physical body (often painfully on the way out) within muscles, even bone marrow, and more.

Addictions become apparent as they are being released through the medicine (there’s nothing like a Sanango diet to show a person where their food addictions are – most people in the West have some form of it – and I am definitely a poster child for them!)

So we were lucky enough to be able to go out into a jungle campground to do it – away from the village, people, outside noises. Just us and the rainforest.

The first day, before we even left I felt, off. Slight headache, irritable, didn’t know why. It kept building during the day, until we were all settled, mosquito nets up, ready to start preparing for the first night’s tea. By the time the preparation began, I was in a full-fledged migraine.

Now, I can’t speak for everyone, but migraines for me only started to occur when I began intense spiritual work (partway through my second year at Inner Visions was the first one). I have never once gotten one in Peru – only in the States when I am way off balance or have something major to purge.

It seems I have programmed my body (through intention and action) to continuously purge when necessary, so when something physical and big needs to go, and I’m not in ceremony to flush it out quickly, I get the infamous migraine purge.

I first recognized it as a purge instead of a debilitating nuisance after returning to the States after my first four month round in the Medicine. Luco had cautioned me about drinking liquor (beer was fine in quantities my body and mind could handle, but with this new body and less room for dark shit, alcohol opens up the energetic body in both directions (in and out) and new dark crap would be much more apparent to me (like when you don’t notice one shirt on the floor when all your clothes are all over the place, but if it’s by itself it stands out.)

For awhile I heeded the warning, but later I rebelled and drank liquor anyway. The next morning, when I was on the bathroom floor in the dark, fevering, grasping my throbbing head, vomiting and dry-heaving non-stop, I began to get flash visions that I didn’t have the mental energy to look at.

I called Luco’s spirit, physically felt him tug at my earlobe, then saw him preparing to give me a ventiada for some relief. He had a face, almost rolling his eyes smiling, not needing to say I told you so.

When the migraine purge completes, I feel like a million bucks. They are insanely more painful and debilitating than purging in ceremony, but they work. Again, I don’t know if this is true for everyone, but for whatever reason, my body is programmed that way.

So, as they are preparing Sanango, I go into my migraine ceremony. Hell. When it finally completes, I have intense pain in my urinary tract for another four hours. I had to sit in the river for an hour for some relief. I hadn’t even drank the Sanango yet. 3am when it was time to, the pre-purge was ready and I swallowed the burning liquid.

Over the next few days I felt empowered as the ‘film’ was released off my spirit and body. I knew the diet was easier because of the migraine pre-purge.

Luco and I Need to Talk

Soon, I began another round of feeling heavy jealousy over nothing. Intense. I didn’t know why. I was getting irritable as these things came up and out, but I was having a hard time managing myself, and made some unnecessary comments to Luco, which made it worse all around. It was just a purge after all, but while in you’re in it, it’s hard to see.

It all came to a head when I realized Luco and I could not go on like this anymore. I had been all over the place the last month, and when I am purging this shit, he obviously pulls away (though I am not my purge/jealousy, my spirit is not available in the moment when it is up, and who wants a relationship with someone’s jealousy?)

So we talked, and he said the same thing…it can’t be the way it is. We decided to let it go.

I went and cried, hard. Once again, releasing the expectation that this will last forever. I realized that I needed to walk this leg of the journey alone…without having to look at him every day. I would need to go back to the US a month early.

This happened to be the same day I had to make a trip back to the village to check email (since we had people coming in next group). By the time we got back, I felt so much better. Like it had all purged, and I was myself again for the first time in a month. He was even back to his old self in response to me being mine.

I was suddenly wondering what the big deal had been before, everything was fine. We didn’t need labels, or commitment, or ownership of each other. We were just in our spirit connection physically. I felt great. So why did I still feel like I needed to go back to the States?

Knowing When it’s Time to Walk

I ended up completing the last few days of the diet alone at the house in the village. I needed to be away from other people, so I could clear my head. By the time the diet was complete and everyone came back, I knew why I needed to leave.

Sometimes the Divine flows outside of my planned schedule. This is our first very large long-term group of apprentices, and this is definitely the year of letting systems create themselves organically. Which means, at times, it can be a little chaotic.

The group had been together for almost two months now, and many, MANY things were up to purge. Triggers, triggers, triggers. We talk a lot about communication, and not letting resentment bubbles build and explode.

I could sense things happening around me, and fingers pointed at me, with words unspoken to me. The last day, several conversations confirmed these suspicions. Nothing can be changed until words are spoken in love. But it worked out Divinely, because I have been so maxed out the last two months, I would have been overloaded anyway.

We have several core apprentices who are ready to hold down the fort, one who has been a Lead already and others who will be in the future. All is supported, all is in line. They will have the opportunity to train, while the resentment builds will dissipate and get to the core issues that needed to be addressed.

Many in this group are ready to ‘leave the nest’ so to speak, so they can fly free:) I am excited to see how the new dynamic unfolds, in the best interest of everyone, without my physical presence there (though spiritually, of course, I’ll be everywhere!)

So I head back on Friday, curious to see what this re-flow turns into. I will keep the blog going, since my apprenticeship does not stop outside of ceremony (the Medicine inside of me continues at full force!) Much love to everyone, and I’ll keep you updated!