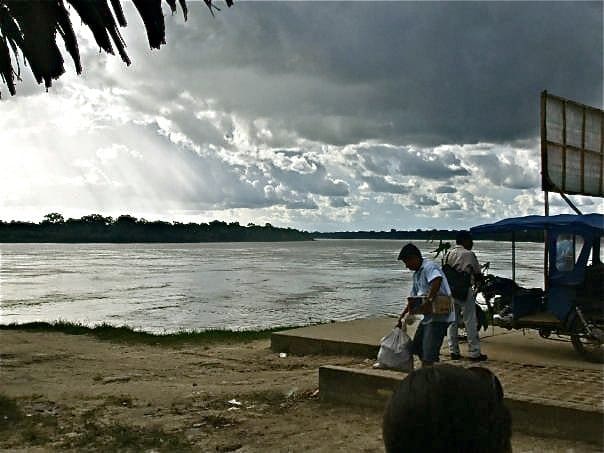 So the Boyfriend (ex now?) and the Spunky One had been visiting for weeks and dealt with the village parents “presenting” their adult daughters to him competitively as the pair had broken up (see The Reality of Village Life Sets In).

They had decided to give some money to the Elder shaman to build them a small house in the village after they left. Being the middle man for everything, while the Elder was gone working at the program, they gave it to Luco instead (he had to run to Iquitos, and would see the Elder there.)

Somehow only two out of the three envelopes made it back. Once this was discovered, a frenzy broke out. The tornado had officially touched ground.

“Can you believe he would steal money from his own family? I knew that guy was bad news…” Within an hour rumors (some outlandish) were flying all over town.

The Elder and his family, as well the older shaman couple and their apprentice adult son, had all instantly turned their backs on him. He didn’t even know what was going on. Luckily, Boyfriend and the Spunky One came and told him their concern.

“I didn’t even know how many there were,” he explained. “I stuck them in my book to bring back to Iquitos, and then when I didn’t see him [the Elder], I asked my friend to grab them for me out of the apartment, and I brought them to you.” The Boyfriend was still skeptical.

“Is it possible the third envelope is still in the book?” he asked.

“Let me go call my friend and see.” And with that Luco went off to find out the scoop. A few minutes later, he came back. “Yep, it’s in there. I’m not sure what happened, but it’s on the way back here. Sorry about that.”

But it was too late. Any kind of resentment, irritation, projection, or judgment aimed at Luco that had built up anywhere in that family, had burst through.

It didn’t seem to matter the fact that Luco constantly gave the Elder and his family money (I’ve witnessed this multiple times), or did favors for him as the go-between for the Elder’s friends in the US (since he didn’t have a phone and was a bit oldschool for email.) It didn’t seem to matter all of the times Luco had saved him from his own drunkenness. All that mattered is that he supposedly stole the third envelope.

“Meghan, these two [Boyfriend and Spunky] are friends,” he said to me through teary eyes. “He brought gifts for my kids. Why would I try to rob them? And [the Elder] has been my best friend for years. I just don’t understand how after all we’ve been through, he could think I would do something like that. He didn’t even ask me what happened; he just started talking shit.”

The pain in his heart was apparent. There was a piece of me who wanted to believe him, yet at the same time I secretly remained nervous about my own hidden skepticism. Though his logic seemed right, and it felt like what he was saying was true, there were so many others saying the opposite. I mean, the Elder is the Maestro. The top dog. He wouldn’t lie over something so trivial, would he?

As time went on, I got more confused. I wanted to believe him, and I remained loyal on the surface, riding it out, but a part of me was becoming really scared that I had gotten myself in deep, emotionally and financially, with a con-artist.

Over the weeks, the twister picked up speed. Luco had started opting out of ceremony, not liking the energy in the group obviously. Plus he had a debilitating fever. He encouraged me to still participate, so I could have my experience in the Medicine. I felt a little guilty, but I needed cleansing and clarity more than ever.

Partway through the ceremony, the apprentice son of the married shamans looks at the Elder and declared that Luco does not want him to give me a ventiada (a type of healing the shaman does on the participant to help pull out dark energies faster and give some relief.) Supposedly the apprentice had seen this spiritually.

“Give her one,” the Elder shot back. During the ventiada, I could hear the Elder and the married shamans talking about me. Earlier in the day, I had picked up some energy from a heated conversation with a friend of mine that I was sure was in the middle of being purged. I thought they were talking about this, since it’s a heavier energy than they usually see in me. After it was over, I asked what they saw.

“Eluco didn’t want you healed. He took our money, and now is manipulating you. He’s bad news, you should not trust him,” the booming voice of the Elder echoed through the house, for all to hear. I didn’t say a word. I didn’t know what to say, or what to think. I didn’t know who to believe. My heart was telling me to trust Luco, but everyone else in the world was telling me otherwise. Was I just blinded by love?

The storm continued over the next couple of weeks. Even though I wasn’t 100% clear, I knew I needed to physically ride this out with Luco and the Beautiful Girl. The Elder’s house and mesa had turned into a cesspool of shit-talking, nasty energy, that I couldn’t even be comfortable in. I was just gonna have to simply wait and see until the truth became clear. As Boyfriend and Spunky were on their way out of the village, she came with some news that made me feel a bit more validated.

“You will never believe what happened,” she began. “Okay, so the apprentice’s sister, the one that wants my ex-boyfriend, came up to him in tears the other day, saying she needed to get out of the village and get to Lima. Her mom (the woman of the married shaman couple) piped in with this whole story, of how it’s an emergency that she leaves now.

It didn’t make a lot of sense, the story, and it ultimately ended with them trying to manipulate money out of us! I do not trust that family. When we did ceremonies out there on our own, all they did was talk shit about Luco. They said he was the reason we weren’t getting visions, because he was blocking them spiritually.

But I think it was just because of the heavy shit-talking energy happening there! It ruined our whole time. I’m not sure what I believe exactly, but I know for sure I can’t trust their family. And I’m not 100% clear on the Elder and his either. Luco too. I don’t know who to believe.” Her words felt like someone had finally been welcomed to my world.

“Wow dude, that sucks. Why would Luco block your visions? Can they even do that?” I asked.

“Not sure, but I doubt he was doing it. But if they can I still don’t believe it, considering the place they were all coming from.” She prepared to head out of the village and back to the West. “Meghan, I’m not sure when I can come back here. This shit-talking is insane, and really uncomfortable for me. Will you let me know when it dies down?”

“Absolutely. Hopefully it won’t be too long,” I answered earnestly. I didn’t know how long I could last in it either.

The torrential winds of gossip blew as the energy in the village become more and more tense. I started hearing rumors from people who worked at the original program that we were being talked about in ceremony, even speculation that we were having dark forces sent our way.

The energy when we walked by the Elder’s house became a chore to trudge through. It was getting to the point that I had mixed feelings even having ceremonies there. It was April, and the end of my three months in Peru was approaching, and can’t say I wasn’t ready. I needed to clear my head.

What is Really Going On?

The plan was for me to return to Peru in August and prepare to begin accepting others who wanted to come down to work with the Elder and Luco. The website had been generating traffic, and plans were brewing for people to come down when we were to open in October.

But nothing could happen until I was 100% clear that what we were doing was right, safe, and completely in integrity. That would be the goal of my summer. To find out the truth, without a shadow of a doubt.

It was a bittersweet goodbye as the Beautiful Girl (who happened to be heading back at the same time) and I headed back to the States. I looked at Luco, deeply, and felt such a strong desire and connection to continue work with him. I prayed to God he was who I thought he was.

← Ayahuasca Ceremony #14-19/Plant Diet #1: The Reality of Village Life Sets in Searching for the Truth →