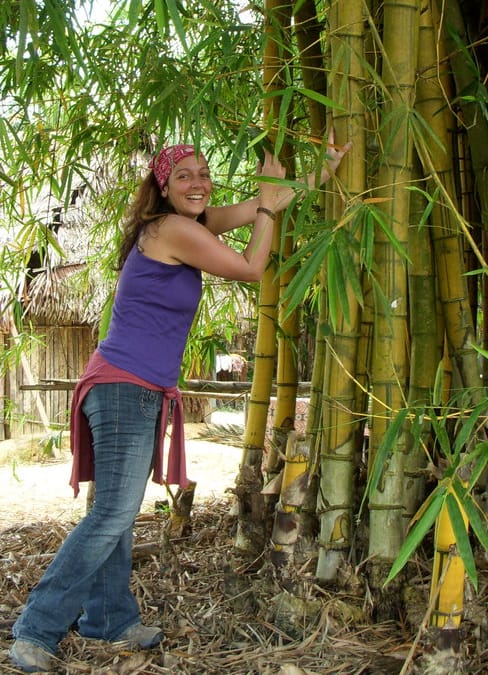 I had no idea I’d be walking into full-blown Ayahuasca shamanic apprenticeship in the Amazon jungle. I was just getting a coca-leaf reading from a shaman.

He says the chant is for protection….

Wake up, quick breakfast, and head off to Hausao, an outskirt of Cusco, Peru, for a reading from a Peruvian shaman. It’s very different here than in the mountainous city.

Down a dusty dirt road we pass run-down adobe houses with thatched roofs and rustic wood paneling. Dogs, roosters and kids litter the streets, even at 7am. We pull up to what seems to be the place. The taxi driver waits as I timidly knock on the door.

A woman welcomes me and asks me if I’m here to see Don Martin. After affirming, she sits me down outside to wait. I look around at the cluttered central area. Clothes hang from the line. A couple of cows are eating breakfast. A man is shoveling their manure nearby.

The smell of Peruvian almost-farm life is rich and pure. I keep waiting, becoming slightly uncomfortable from the cultural lag-time. He told me to come at this early hour, but I still worry I may be inconveniencing him. God, I hope I can communicate well enough for this coca leaf reading—my Spanish is still very much in survival mode.

Finally the man who had been shoveling the cow poo comes up to me and introduces himself to me as the infamous Don Martin. I was surprised he was doing the housework (I guess I always pictured esteemed shamans having people do that stuff for them—I’m such a Westerner). Soon after, he ushers me into his healing quarters.

I look up, breathless at the sight of a full-sized condor, with a wingspan taller than a man, spread along the ceiling, perched facing me.

He tells the story of how he was walking along and found the majestic animal sick, dying…and how the bird passed away in his arms. He brought the physical body back to the house and continues to work with the condor spirit for intense healing.

After some weak Spanish small talk, we begin the reading. He lays out handfuls of coca leaves and begins to talk. I lose pieces along the way, but what I do hear loud and clear is that I will be working with medicinal plants out in the Peruvian Amazon, assisting Westerners with their spiritual healing.

He said I would live to be ninety years old, and die a very wise woman. He then puts me underneath the outstretched condor and begins a healing chant, and I feel powerful energy flooding through my body.

He says the chant is for protection….

It’s hard to believe it’s been almost nine years since I first stepped foot into the Amazon jungle. It was like a dream that lasted for years; so hyper-real that it now seems almost like an illusion.

I had no idea when I embarked on my personal journey that I would find myself and my spirit; and that my calling would lead across the globe, into the thickness of the South American jungle, and through the eyes of a sacred plant they locally call Ayahuasca.

Just Wanted to Get Happy

Initially I just wanted to get happy. Not be fat anymore. Not be depressed. Be the person I felt was trapped underneath my teen-turned-adult angst. At 21 I put myself in therapy, realizing I no longer believed in love and if I were to continue as such, my life was more or less going to suck.

After struggling to complete the program, the strongest gut feeling I’ve had in my life pushed me to Costa Rica to learn the basics of Spanish. And afterwards, out to Peru where I’d immediately be introduced to the shaman I’d work with for the next five years, learning the secrets of the sacred plant, Ayahuasca. Life turned on its head.

Ayahuasca is a combination of plants considered sacred in the Amazon, the core being comprised of a vine locally called Ayahuasca, as well as the leaves of the Chacruna plant. There are many other names for this healing powerhouse, including Spanish translations of  “The Medicine”, “The Mother”, and “The Purge”.

The mixture often incorporates roots, tree barks or other plants known to have various healing properties. The shaman is the bridge between the spirits of these plants and the sacred ceremony during which the mixture is ingested as tea.

Most frequently, shamans communicate with the plants’ spirits through sacred songs called Icaros, during a special ceremony. Intention has a lot to do with the outcome of ceremony, akin to how our intention also affects the outcome of our lives.

Most people come to Ayahuasca for one of three general reasons:

During the ceremony, the Ayahuasca enters the body and begins a healing process, governed by a myriad of factors. Assuming that intention, openness and willingness are in the right place for the integrity of the self and the ceremony, the medicine spirits and the subject’s spirit will work together to prioritize healing.

The outcome of the healing is based on the person’s most urgent needs, and whether they can handle simultaneous purging and seeing. When I started, I could only handle purging certain aspects at a time. I had to release and strengthen my spiritual and emotional muscles to get to the deeper core issues, which are inevitably the most elusive.

One of the major draws to working with Ayahuasca, is the medicine’s ability to teach a person during ceremony. The concept of plants teaching anybody made no sense to me before I began apprenticeship. Later, I came to understand that Ayahuasca teaches by allowing me to release the filters and blocks that prevent me from seeing myself clearly.

The most unique factor about this particular plant combination is the purge, wherein people release negative energy trapped in the body via physical or emotional channels.

When someone experiences a trauma and “stuffs” it into the body, never fully facing it or letting it heal, this negative energy sits in the body and festers, growing heavy and rancid as long as it’s locked in place.

Often, the wounds (or deep beliefs about ourselves and our inherent value) are so threatening for us to face that we develop complicated defense systems to protect ourselves from feeling their wrath.

These defense systems create structures and filters for our mind to think through, causing us to lose levels of clarity. As adaptable as we humans  are, we can get used to this fog, adjusting to a heavier energy baseline than what’s natural for us.

Of course, there are other spiritual paths that allow us to release and heal. Sometimes life, age and experience opens the door for those defenses to break down, naturally letting the trapped energy out of the body. But sometimes it doesn’t, and we may sense that something beneath the surface is impacting our experiences.

Many paths work with intentional release of these energies; Ayahuasca just does it quickly and efficiently—which is not always good—there are pros and cons to an accelerated spiritual process.

Personally, I needed it hard and fast: it was the only way I could convince my mind it was actually working.

The body purges and through introspection self-development continues. Through ceremony this cycle is accelerated and condensed, allowing us to  actively participate and observe the results more quickly.

An increased pace means that the purging is fast too, and often when a person is releasing negative energy, they re-experience it on the way out. The manifestation of this expelled energy can be intense, involving some serious confrontation of inner demons.

Sometimes people continue emotional purging after the session has ended and don’t even realize it—spewing their refuse all over people around them. Most Ayahuasca centers focus on preparation (both before a person begins healing, and also before and after ceremonies) around the personal purging process and offer much needed support.

Certain types of energies can be purged in one shot, but deep beliefs and paradigms often require a much longer process. A good Ayahuasca practitioner knows that even though their approach is accelerated, spiritual growth is a lifetime’s worth of work.

The human mind and heart has many layers and levels: there will always be progress to achieve so we might as well relax into the process.

While Ayahuasca works on slowly chipping away at a flawed belief system via purging, it will simultaneously also strengthen mental and emotional muscles. In addition, a third major teaching component comes in the form of wisdom. People often come out of ceremonies with epiphanies way beyond normal thinking capacity.

This information can be received in many forms; via visions, sounds, intuitions, physical energies, emotional understandings, etc. Participating in ceremony is like spiritual boot camp, where we flex our strength to a new level so we can gain newfound ability.

The idea is to purge, heal and train in ceremony, then integrate the new knowledge into everyday life and society; unifying the clearer, stronger version of ourselves with others.

This path is not for everyone. In fact, I would dare to offer it may not be for most people. A person first and foremost must feel a very clear spiritual draw to work with Ayahuasca; meaning, people shouldn’t be convinced it is right for them. There are certain medical and psychological conditions and medications that conflict with Ayahuasca healing.

Also, it’s not everyone’s match for pace, as emotional purging takes time and energy, and is hard to manage on top of a normal schedule. That being said, for those to whom Ayahuasca is helpful, it can be tremendously rewarding, assuming the person is ready and willing to take on their end of the intensive inner work.

Working with Ayahuasca has been one of my most amazing, yet most challenging experiences, and has been a tremendous blessing. Sometimes it was unbearably hard, to the point of nearly abandoning the work.

Other times I could see more clearly than ever before, giving me access to general wisdom and understanding I never could have fathomed with my little mind.

The overall impact Ayahuasca continues to have on my life is truly beyond measure, and it has taught me so well that I don’t need physical ceremony like I used to. Not to say I won’t ever participate again (I definitely will) but I now have the skill set to continue my process with the spirits alone, while living in the US and raising a small child.

I’ve spent the past two years integrating the 230+ ceremonies in which I participated over a span of five years, and the learning, training and purging continues, level after level. I have come to appreciate the slower “out of ceremony” pace now, but I certainly needed the fast-paced intensity to get to where I am today.

Interconnectivity of All Things

The Ayahuasca path has opened my eyes to see the connections among all lifeforms, and the beauty of our various approaches to life. I have finally found myself, my spirit and my calling—releasing depression and obesity in the process—and I can trust my relationship with the world around me in a physical and spiritual manner.

Most of all, working with Ayahuasca has taught me how to learn, how to listen, and how to recognize when my little ego is in the way. Of all the skills, this is the gift that keeps on giving, and for this I am eternally grateful. Sometimes when life turns itself on its head, if we are willing to do our part, we can come out a new person on the other side.

← Following the Daydreams: A Window into the Subconscious Mind Where Has Meghan Been? →