Coca Leaf Reading in the Andes 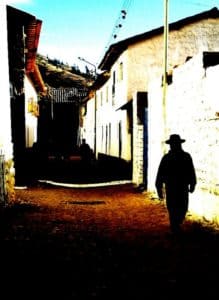 These Ayahuasca Apprenticeship Journals are a compilation of actual journal entries (edited for readability), blogs, and experiences during my time in Peru and in the States beginning in 2007, continuing through the present (as in reality, it’s all one big apprenticeship, no matter where I am and whether I’m in physical ceremony or not). Everything written is done so with as much integrity and clarity as I could offer.

I wrote these blogs as I was learning (so there’s some naiveté and ego you may catch that I couldn’t back then) so bear with my learning curve and take my experience with a grain of salt. I didn’t start out with the 250+ amount of ceremonies I have now, and my ego may show up in the writing to embarrass me and prove it:) I do add expanded insight from my future self at important time along the way.

Some of the exact dates and ceremony numbers are estimates. Once I got into a rhythm supporting groups for the shaman (five ceremonies per group) and blogging about my own experiences in between them, the numbers become more accurate.

To protect confidentiality, many names have been omitted and pieces of the story have intentionally left out to protect the privacy of others. Luco has given full permission to share our story (even the not-so-flattering parts) in the name of transparency and growth for the greater good as well.

Of course, there will be a natural bias as these are my own experiences, from my perspective, at the time of writing. There may be parts to the stories I do/did not have access to, nor can I speak to anyone else’s experiences but my own.

Every post is public and shareable – no need to ask. Being as transparent and real about my experiences, from my perspective, is one of the things I can give back to the Medicine and community so it can be used however it needs to be. Hopefully it will offer some insights and help people skip a couple of steps I had to learn the hard way.

There is a richness to the learning curve of a spiritual process like this, and no separation between physical world triggers and catalysts and the growth along the way. I hope sharing my story helps stimulate forward motion in yours, and I thank you for taking the journey with me:)

“Aqui, gracias.” I pulled out my Peruvian Soles and paid the taxi driver. Guess we’d found the place.

It seemed like such a normal barrio for the outskirts of the Andes. It was a beautiful morning, cool and crisp. Still quiet, less the emerging birdsongs, rooster crows and murmur of an occasional voice.

The sun was beginning to warm these dusty streets, casting deep shadows off the run-down adobe and wood paneled houses, while the slightest breeze created a rustle through leaves of thatched roofs.

The land still had that magnetic feel of its mountains below, a vivid quality of aliveness that those deep, wise stones and earth cast above to their surroundings.

I sensed the children born of these mountains knew it too, existing in harmony with their true guardian. They simply lived – puttering about, drawing pictures with rocks in the land while dogs sniffed around for stray breakfast.

Mothers picked up their brooms for the sunrise sweep of the living room dirt floor, glancing up briefly to see what a taxi was doing down that bumpy road so early in the morning. The smell of firewood and its enchanting crackle drifted through the crevices of the scene, culminating in a serene glimpse of what that harmonious mountain/child relationship could feel like.

A leap of faith and a nervous knock was all I could muster. Even though we had scheduled our meeting at this early hour so I could catch my flight, I wasn’t sure he would be ready for me. Peruvian time is historically more laid-back than Western, but airports don’t care what country you’re from. A young woman, maybe my age, answered the door.

“Buenos dias, soy Meghan. Estoy aqui por Don Martin?”  My Spanish still teetered somewhere between survival and conversational, coming off awkward and very gringa. I had prayed I’d be able to understand him, as I’d sensed this meeting was important somehow.

“Si, Meghan buenos dias. Venga aqui.” She led me around the outside of the house, through a gate into the backyard, gesturing for me to take a seat on a bench. “Momento, por favor.”

With that, she disappeared into the house, leaving me alone with a man shuffling around between shirts on the clothesline.

He looked older, maybe mid-50’s. He seemed to be shoveling cow manure, a cigarette hanging from his lips. I glanced around, trying not to appear uncomfortable (I hadn’t quite mastered local etiquette yet.) Every part of me wanted to fill the silence with soothing American small talk. I refrained, sensing that was not how it was done out here. I decided to sit and wait until he addressed me.

The sun shone off the clothes drying on the line vividly, possibly to a more heightened degree than a normal day. The rich smell of almost-farm life was earthy and pure, punctuated by a rooster scurrying past my foot in pursuit of a worm. I drew circles in the dirt with my hiking boot, trying to see if there was any symbolism in the design it created. The whole thing felt important somehow.

Waiting Uncomfortably for the Peruvian Shaman

Time ran slow in this part of the world, and the pace of rural life was something I would have to get used to. As much as I’d like to think I was a laid-back personality, my inner DC Suburbanite still ran the default time clock, and it took work to not let it speed up to the bustle of what I thought I needed to be productive enough.

Sitting. Waiting. No phone. No internet. No music. Just me and my thoughts across from an old man and his cow shit. This was my now. I fought hard to contain my anxious curiosity, but merely masking my face was the best I could muster.

The trip up until now had fallen into place like the flow of an easy stream. I had spent so many years waiting for my life to begin (after I lost the weight, or after I met the right guy, after I had enough money, etc.) There was always something. If none of those things ever happened, I would have missed out on this whole big life experience completely, standing on the edge of the cliffs, judging myself as not good enough to jump in.

I would have died up there, an old, lonely woman, staring into the glittering waterfall below, feeling sorry for myself that all these outside forces victimized me into missing out. Somewhere along the way, I began to realize that the only outside force was my own mind, trying to prove my fears right.

Finally (thank God) the man who had been shoveling decided to acknowledge my presence and introduce himself as Don Martin. His name was a bit famous in Western shamanic circles, as he was said to have astounding fortune-telling abilities through reading the leaves of the coca plant.

I was surprised he was the one doing the housework. I guess I always pictured Master Shamans having people do that stuff for them. We ducked under a door as he ushered me into the healing quarters, stepping for a moment into his world.

I nearly toppled over as my eyes grasped a full-sized condor, wingspan taller than a man, spread along the ceiling, perched with eyes directly on me. It wasn’t alive anymore of course, yet it was still an impactful sight. The shaman began to tell the story (in simple Spanish) of how he once took a casual walk, finding the majestic animal near death. Upon his embrace, the bird passed away in his arms. He brought the remains back to the house and continued to work with the condor’s spirit for intense healing. It sounded amazing, assuming it was true.

After some weak small talk, we began the reading. He gently tossed handfuls of coca leaves on the table and began speaking, interpreting what he saw for me between the lines of the design in which they fell. He asked if I had any questions.

I asked first about the infamous ex-boyfriend it had been taking years to shake (receiving a no, for now at least), but a new guy was on the horizon. Apparently I would be having two children around age 28ish (a boy and a girl) and be married at 33/34 (and he didn’t say whether they were with New Guy or not).

I was losing pieces along the way as he continued, but what I did hear loud and clear is that supposedly I would be working with Ayahuasca sacred plant Medicine out in the Peruvian Amazon, assisting Westerners with their spiritual healing. Something about many languages, yoga, psychology…

He said I would live to be 90 years old, and die a very wise woman.

Despite the incredulity of his words, I didn’t have time to absorb it right then, as apparently it was time for me to sit underneath the outstretched condor. After some consideration, he pulled a large, white stone off a shelf full of a myriad of shamanic tools, handing it to me for my journey. I felt its cool, smooth lumps within my palm, calming me already.

I closed my eyes, and he began with some kind of healing chant, sung in rhythmically in Spanish. Immediately I felt my body start to tingle, building into a small whirlwind both inside and surrounding me.

Like a vortex between the earth below and the condor above, I was swallowed by physical and visual colors, buzzing and crackling as electricity surged, zinging through my body to a near orgasmic peak. My mind could barely think while it was being blown apart in a matter of seconds.

Once the ceremony had released, I took a deep breath, looking around the room. Everything was the same, but my eyes were different. They saw more color, more aliveness, more magic. Every fiber of my soul knew that this was just the beginning. I thanked him, my eyes begging the question – what the hell was that?

“Proteccion,”  he added, and I think I detected a smile.