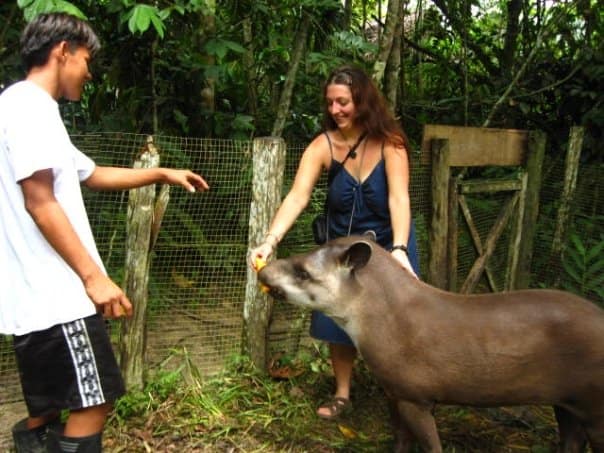 So Luco and I had ten days in between groups at the Ayahuasca center. We’d finished one, and I’d pre-paid two more (not cheap either!) Ten days of actually having the opportunity to explore whether there was something real there, or this was one of those cliche ‘gringa chick thinks she falls for the apprentice while international’ kind of deals.

I was nervous, and had no idea what it was gonna be like. This would show if he was really interested in me or just enjoying the flirting that was in front of him. I was ready to find out.

For the first few days, it was magical. He took me everywhere. To the butterfly farm, to Quistococha (the beach/zoo place), out on a little boat around Belen. We had fish on the bone at a cool restaurant overlooking the water in Nanay. We even went dancing at the discoteque!

It was amazing. I was falling fast. I had never met anyone like him, with a glowing, huge heart and so much simple, humble wisdom to share. And he was cool…a lot of fun. Happy, chill, crazy at times…like a normal person, not like a cloud-floating guru. And for whatever reason, he was spending his time with me.

I won’t question a gift, even if I don’t understand it. He even started talking about long-term possibilities between us, and as illogical I thought they might be, my heart fluttered in excitement at the thought.

One day I was hanging in my hotel room (also overlooking the water), when I got an unexpected knock on my door. It was Luco, looking out of sorts to say the least. He began talking in fast Spanish, and I only caught the important part.

“No mas trabajo,” he told me, a profound sadness in his voice. What? He’d been working at the place for a few years. What happened? Why now?

He went on to explain what had happened, at least from his perspective. Apparently, the Western shaman was okay with the elder shaman and Luco having guests out in their village in between program groups.

One guy from Canada, who for some reason was not welcome back at the program, contacted Luco to be the go-between to get a message to the Elder (Luco had email and a phone, while the Elder did not.) The guy wanted to set up a group led by the Elder, in between program groups. They agreed, through Luco as the middleman, and it was set.

So the thing spun a bit farther out of control than either of the Peruvians expected. Apparently the guy went on to advertise publicly, create a website, etc, using the Elder’s name as the hook (which I later verified with my own eyes).

When the Western shaman found out about this, he was understandably a little peeved. Luco was in Iquitos, while the Elder in the village, so Luco got the interrogation.

Now, understand, Luco and the Elder are family in the village. The Elder’s daughter is Luco’s ex-wife and mother of his two kids, and they have been very close over the last several years. The Elder began doing ceremonies with Luco’s maestro many years back (he’d been working with him since his brother was killed).

So when the direct question came, asking Luco what the Elder had done, he did what family does in Peruvian culture: he covered for him.

The Western shaman knew it was a lie, and fired Luco on the spot. I could see the pain in his eyes as he relayed the story. That place had become a home for him, where he had created profound friendships with people from all over the world. And in an instant, it was gone.

I was speechless. Maybe it would blow over, I said, thinking it may have been just an emotional reaction from the Western shaman. After all, Luco did a lot at that program, and had held an important space there, in and out of ceremony.

He knows Luco’s a good guy, and he’s been in this culture long enough to understand the differences in communication. He was above all of this, I knew it. It would work out.

By the end of the week, we both realized it wouldn’t. Collecting his things from the lodge was the final step. It was official, Luco no longer worked at his beloved program.

I was at an impasse. I knew in this moment, my next move was crucial. I thought for a second about the money I had in deposits that had taken a lot of work for me to make.

He was my shaman, whether he was considered by the Western shaman (with significantly less years of experience) as an apprentice or not. I had one month left in Peru.

“Well, could I come out with you to village?” The words felt so right as they came out of my mouth. He smiled, and we began talking about the official beginning of my apprenticeship with him.

I had planned to go tell the Western shaman the next day that I wouldn’t be coming back. He knew the connection between Luco and I, and I was sure he’d understand. Even if I didn’t get the deposits back, it was only money. This is the Medicine at work. My plan was quickly stunted by a message from the Elder from the village.

“I talked to the Elder on the phone today. He says you should not tell the Western shaman the truth, even if he knows you are lying. It will be in the best interest of everyone involved.” The words coming from Luco’s mouth weighed heavily on me. What? Why?

I hate fucking lying, especially when I don’t see a reason for it. And I’m terrible at it. And, despite the recent happenings, I like the Western shaman, and would like to keep things cool between us. He’s not gonna give a shit.

But this is a message from the Master Shaman. The top dog. The Western shaman’s Maestro. My Maestro? I don’t really know what that means, but I feel like I can’t just disobey him. He is a shaman, he can see more than I can.

Maybe I will do more damage if I tell the truth. Fuck, dude. I don’t really feel like I have a choice, especially because the Elder is not here to try to debate with (I doubt that would work anyway.) I guess I have to do what he says.

Scared shitless, I head into the office the morning of the first group to de-grudgingly tell my lie, supposedly for the good of all. I am shaking with butterflies in my stomach. Soon, I see the Western shaman.

I take a deep breath, hating the fact that I have to lie to this amazing guy who has done so much for me. Guilt was written all over my face. I force the smile.

“Hey, bad news! I have to go back to the States for an emergency. I’m hoping to try to come back, but I’ll have to see,” I feel terrible as this comes out of my mouth. I knew I’d be in village most of the time, so the chances of me running into him were slim.

“Oh, man! Well, that’s cool, we’ll be here when you get back!” he says, almost extra-smiley. I wonder if he’s over-compensating for anger or something at Luco. We didn’t talk about money; it didn’t matter. I was gone either way. I just hated burning bridges for no apparent reason.

Off to the Village in the Amazon, to Begin Ayahuasca Shamanic Apprenticeship

When the dirty deed was done, I got out of there as quickly as I could, and headed back to pack my stuff to take the overnight boat to the village. I called my mom to let her know what was going on.

I had told her about Luco already, and this time stretched her even more mentioning the potential at hand. Though she had an appropriate amount of maternal concern (once she was clear there would be no immediate marriage or babies, she was better) she trusted me and was very open and non-judgemental.

It was exactly what I needed. This may be the weirdest thing I have ever stretched her limits with, and she was impressively rising to the challenge. It’s like her soul knew what to do.

I had since met Luco’s 10-year-old son Jheffri, who along with his sister Tatiana, would be staying in Iquitos with a woman who takes care of them while he’s away. After tying up my loose ends, we headed back to village to officially begin my Ayahuasca apprenticeship.